Asked me Mike Barrow the first time to explain his idea when he began to know the work I have been doing at Antonus, manufacturing electronic musical instruments inspired by classical designs.

In Antonus we work in the first place recreating the mythic analog synthesizer ARP 2600. With that main motivation that is to bring back the sound character, control interface and the physical design of the classic electronic instrument began to develop a line of equipment based on that philosophy always keeping a marked signature of handcraft manufacturing and a lot of dedication at the instrument finish.

Mike inspired by this way of work, by these finish and by the electronic sound, he began to propose the idea of developing something special that could make music with the Costaflores vineyard he owns in Mendoza, Argentina. https://costaflores.com/en.html

Costa Flores is an organic production vineyard where MTB wine is produced with Petit Verdot, Malbec and Cabernet Sauvignon varieties. Costa Flores has in particular a unique monitoring infrastructure, in which various sensors distributed throughout the vineyard are recording data such as soil moisture, ambient temperature, atmospheric pressure … etc. This data is collected and uploaded to a blockchain platform. This blockchain platform is also used to issue token based on each harvest, so that the winery has his own currency depending on how the harvest has been each year.

With this base, the idea of interpreting that data in some way to produce sounds in real time began to work. The device and project was named Vinophonics even before defining its definitive form and functions.

One premise was that the device had physical form, that it was a playable musical instrument, discarding so that it only had virtual representation in a computer program or app.

Furthermore, that instrument should be able to generate sound, based on analog technology and through physical controls. This point is something that Antonus we have specialized.

In addition, the device must be able to connect to the blockchain via Internet to access the vineyard data, and transform that data to voltage values, which is the language that analog synthesizers need to compose their sound structures.

After sketches and concepts the idea was concretized in that the Vinophonics project would be formed on the one hand the Vinophonics instrument itself and on the other hand the Antonus 2600 synthesizer. In this way we take advantage of the great musical capacity and sound synthesis that it has the model 2600 itself and Vinophonics can develop an interface role between the digital world of the blockchain and the physical and electrical world with which it communicates with the 2600. Although Vinophonics’s main idea is to work with that initial tandem, it was also wanted give the freedom to add other analog synthesizers to the set or even replace the 2600 with another analog synthesizer that has connection points and has a voltage control standard.

Vinophonics was especially inspired by the Antonus Step Brother analog sequencer. The Step Brother is an instrument designed to play a voltage-controlled analog synthesizer so that melodic sequences and expressive patterns can be defined using its 16 sequential steps and many built in tools for generating and modifying electrical signals . In addition, the aesthetic with the 2600 is always present, even for its proportions, qualities and finishes as well as its instrument-case philosophy where the cabinet is part of its own case. It is only necessary to close its lid to pick up the instrument and transport it like a guitar or saxophone case.

Although the roles have been separated into large blocks, much remains to be defined of the Vinophonics itself.

For example, an important point because of its complexity was the decision to perform a physical transfer function.

16 vineyard parameters were taken as references for the sound interpretation. The idea is that these data in addition to being transformed into sound also had a physical representation by movement. To do this the data would be transformed into electrical signals that would move each of the 16 main controls of Vinophonics. Those 16 main controls are 60mm motorized slide potentiometers which will respond to both the signals received from the Blockchain and the physical movement of the performer in front of the instrument at all times.

Vinophonics by default grants a signal that can be static, oscillating or random… at each of the 16 parameters. These signals come from both Vinophonics itself thanks to its signal generation and manipulation section and can come from any external gear with which it interacts using 3.5mm jack connection cables. This type of connection philosophy is inspired by modular analog synthesizers which interconnect their parts using cables.

With these 16 channels Vinophonics has the ability to process each channel individually by means of attenuation, perform summation functions in several parts as if a signal mixer were involved, in addition to offering a sequential output through which each of them is switched consecutively the 16 channels in a single output. This function is taken from the idea of a musical step sequencer but instead of sequencing fixed values such as “musical notes” what is going to be sequenced are dynamic events which can be static or constantly changing depending on the signal that be present at that time in each channel. You can sequence “notes” or modulations or sequence portions of audio as different channels are sequenced each with different signals.

Each of the channels has a pre-connected or normalized function but this signal can be interrupted at any time by a different signal from either Vinophonics itself, a synthesizer or an external device.

When Vinophonics connects to the blockchain, each slider will move to the corresponding position on the scale of the driver parameter. For example, if channel 5 is due to solar radiation, at nighttime the slider will be in low positions and as the sun rises the slider will go up its position. In this way we not only see a physical representation (slider in motion) of a remote phenomenon but we also have a sound representation of that event. The set of sliders will draw different patterns depending on the weather and time. As the environmental parameters change slowly the update corresponds each time a data update is issued from the vineyard to the Blockchain. Each time a new data stream is synchronized, the Blockchain indicator light on the Vinophonics panel will light.

All the sound result of this interaction will be captured by Vinophonics itself and will be broadcast live via Streaming technology so that anyone in the world can tune in to what Vinophonics is generating as if it were a broadcast of a permanent concert.

So far the vineyard-sound-user interaction is summarized.

The thing, however, is not ending here, since a next stage of the concept will be to incorporate the experience of the winery’s wine consumer in all this.

The approach is that the consumer of a bottle of wine has the option of using their mobile device or computer to be able to digitize the barcode of the bottle to have access to various options offered by the brand, among them will be the ability to use during a limited time an application through which you can use the 16 channels of Vinophonics using a virtual representation of the control panel on your tablet, mobile or computer.

In this way the consumer can move these virtual controls and Vinophonics will collect that information, making it possible for the slider that the user is moving from a remote place to be translated into real remote movement and therefore also a change of the sound material that is running that control

In turn, the user receives in his virtual control panel any variation of the controls that are being given in a direct way by a physical operator and thanks to the streaming technology to be able to listen to the sound result of all this.

To help put order with so many players, a mode selector was defined in the panel.

Vinophonics has a selector that indicates the mode of use, which are three positions:

Local: Where only the local user has the full access to the instrument

Blockchain: Where the vineyard Blockchain data is added to the operation. Local user + blockchain

Remote: Where to the two previous factors we add the control of a remote user through the virtual panel’s web application. Local user + blockchain + remote user

In this way the user can add or subtract performers to the Vinophonics session.

This closes a very deep interactive circle where the distance barriers are erased and allows three-way communication between two people in any part of the world that will share physical sensation through motorized controls, sound sensation due to the result of interactions of the synthesizer and also it will be possible to interact in three bands by including the factor of the data that the vineyard uploads to the Blockchain. Two physically separated people and the vineyard playing all together. 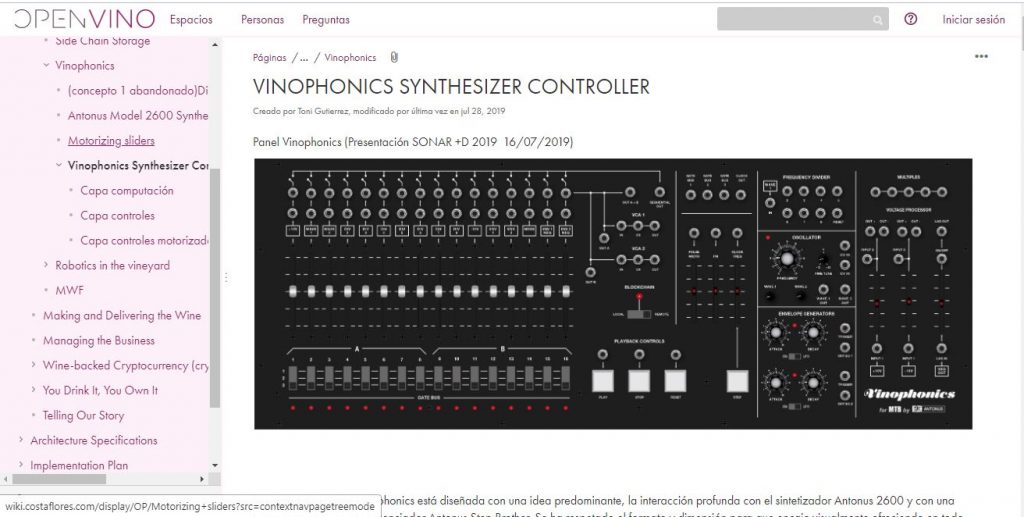 The Vinophonics project is documented within the Costaflores Wiki. As the project progresses and evolutions it will be documented in http://wiki.costaflores.com/display/OP/Vinophonics

This work is part the Openvino project. The Openvino project is a complex group of different projects that spin around the Costaflores vineyard and MTB wine, such as Blockchain, wine-based cryptocurrency, robotic in vineyards … all developments can be followed in http://wiki.costaflores.com